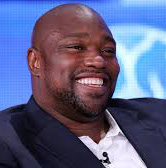 A Super Bowl Champion, Pro-Football Hall of Famer, Sports Media Analyst, Author, Social Media Enthusiast, Entrepreneur, Disruptor and Philanthropist.   The charismatic and loquacious Sapp is recognized as one of the best defensive linemen in NFL history who has intimidated opposing quarterbacks and lineman since the first time he put pads on. The Plymouth, FL native […]

The charismatic and loquacious Sapp is recognized as one of the best defensive linemen in NFL history who has intimidated opposing quarterbacks and lineman since the first time he put pads on. The Plymouth, FL native collected some of the football’s highest honors and accolades in his extensive 13-year NFL career including the 1999 NFL Defensive Player of the Year, four straight First Team All-Pro Selections (1999-2002), selection to the NFL 1990s & 2000s All-Decade Teams and a Super Bowl Championship with the Tampa Bay Buccaneers. Sapp’s 96.5 career sacks are the second-highest all-time for a defensive tackle.

A standout on both sides of the ball while playing at Apopka High School, Sapp was a highly recruited prep star. He signed with the then dominant University of Miami, where he focused on defense and quickly became one of the best linemen in the nation. In 1994, his last season with the Hurricanes, Sapp won the Bronko Nagurski Trophy and the Chuck Bednarik Award as the nation’s best defensive player, and the Lombardi Award for best lineman or linebacker.

In the 1995 NFL Draft, Sapp was chosen 12th overall by the Tampa Bay Buccaneers. It took him just two years to be named to his first Pro Bowl in 1997, the first of seven straight selections. He was named Defensive Player of the Year (1999), NFL All Decade Team and recorded 77 sacks, the second highest in team history.

In 2002, Sapp led the Buccaneers-as the league’s top defensive team-to capture the NFC South Title with the best record in team history (12-4). The Bucs went on to defeat the Oakland Raiders, the nation’s top offensive team, by a score of 48-21 in Super Bowl XXXVII.

In 2004, Sapp signed with the Oakland Raiders. After an injury plagued season in ’05, Sapp returned to his All-Pro form in 2006. Sapp played one more season with the Raiders in ’07 before announcing his retirement on Jan. 4, 2008.

Your wait is over, we are coming soon with the collection

**FREE SHIPPING** on all FAVRE orders within US!